A quick look at the features the GNOSIS SDK provides 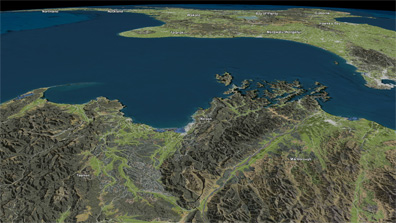 GNOSIS provides you with an object-oriented SDK for visualizing geographic data. The GNOSIS SDK is written using the eC programming language, and bindings for other languages can be provided.

The GNOSIS SDK will run on both 32 and 64 bit platforms, with support for Windows, Linux, OS X and Android. Support for deploying as web application is currently under development and will be based on WebGL. The Ecere SDK can be used in conjunction with GNOSIS to provide a cross-platform framework for easily building an application's user interface, implementing network connectivity or as a uniform API for other system functionality such as file access. 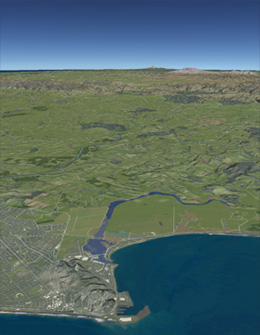 Data is re-projected in real-time with a choice of both 3D views and classic cartographic projections, with a focus on achieving high performance.

Import a variety of formats for elevation data, raster imagery or vector map data along with their associated data fields. Formats supported out of the box include:

Additional formats can also be supported by writing plugins through our maps importing architecture, or by going through intermediate formats already supported. We can also provide an optimal client/server architecture for building and accessing your own map server, as well as integrate with existing standard map server protocols such as WMS.

Maps can be preprocessed and tiled for optimal runtime performance.

Scales from Earth to Ground view

Achieve optimal performance whether you are visualizing the entire globe or a high resolution view from the ground, thanks to multi-resolution maps tiling.

We offer a powerful cascading style sheets system for styling maps. Various selectors such as view range or data fields can determine which styles will be applied.

GNOSIS cartographer allows you to easily preview, import, style and preprocess maps to our optimal map format. Intuitively visualize data fields available for your maps and which data they qualify, keep a library of available map sources, publish and use a collection of maps as a single bundle.